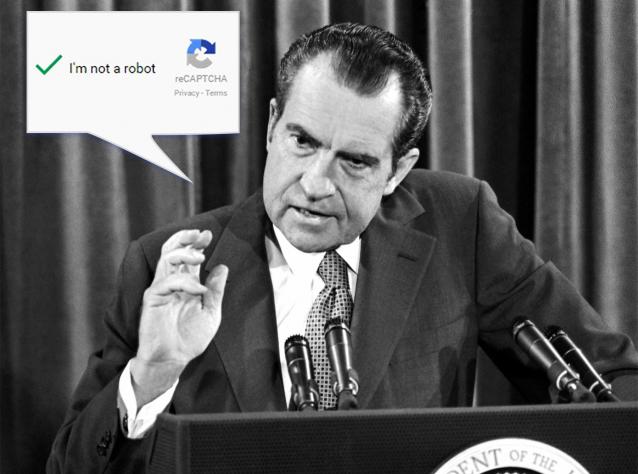 By now, most Internet users have encountered Google’s “I’m am not a robot” Recaptcha. Released in late 2014, the new feature, based on advanced risk analysis techniques, extended earlier Captchas, such as letter or image recognition captchas, which had for years been the nemesis of both bots and humans.

Google's Recaptcha appears to only ask a person to affirm their humanity by clicking into a checkbox associated with the statement,  “I am not a robot.”

Simple as “Open sesame”, right? Almost, but not quite.

The new Google Recaptcha analyzes a website visitor's behaviour or as Google says “the user’s entire engagement”. In earlier Captcha systems, all website visitors were presumed guilty, unless proven innocent by solving what basically amounted to a puzzle. Solve the puzzle and you’re in. Fail and you’re out. In the current version, visitors are presumed innocent, unless they start to “behave” like they are guilty robots.

For example, Google Recaptcha tracks a website visitor’s journey across a web page, tracking, such things as mouse gestures. Hence, the simplicity, yet importance, of the “I am not a robot” mouse click. Robots reveal themselves (most of the time, we hope) by moving toward and then clicking the checkbox like a robot, instead of like a human.

Checking a browser's history is a second level of anti-robot technology used by Google Recaptcha. In case you are not familiar with the concept of browser history, Internet browsers store information, such as web pages visited and web cookies. This information is used to make the browsing experience more efficient and spontaneous.

Google Recaptcha now also uses this information to make the browsing experience more difficult for robots. The history of a browser used by a human will bear the fingerprints of a human’s Internet journey, with which Google is familiar.

If, for some reason, on a particular day, you are behaving like a robot, Google will still attempt to bail you out by falling back on your old friends, previous Captcha systems. Correctly type in some text and you’re home free.